This blog post is very different from what I usually put up here on the blog, but I got so many requests that I decided to deviate from our “regularly scheduled programming.”

After posting the below photo on Instagram yesterday, I got a ton of messages asking how I did my hair and makeup to transform into Bellatrix Lestrange from the Harry Potter franchise!

Fair warning, while the look isn’t complicated, persay, it relies pretty heavily on the subtleties of “real” makeup (as opposed to buying costume make-up). Since I couldn’t just say, “use black eyeliner to create cat whiskers,” or “paint face as creepily as possible to look like a clown,” that means there are a lot of steps. And I tried to be as specific as possible in the steps to recreate the look, which means this blog post is long! 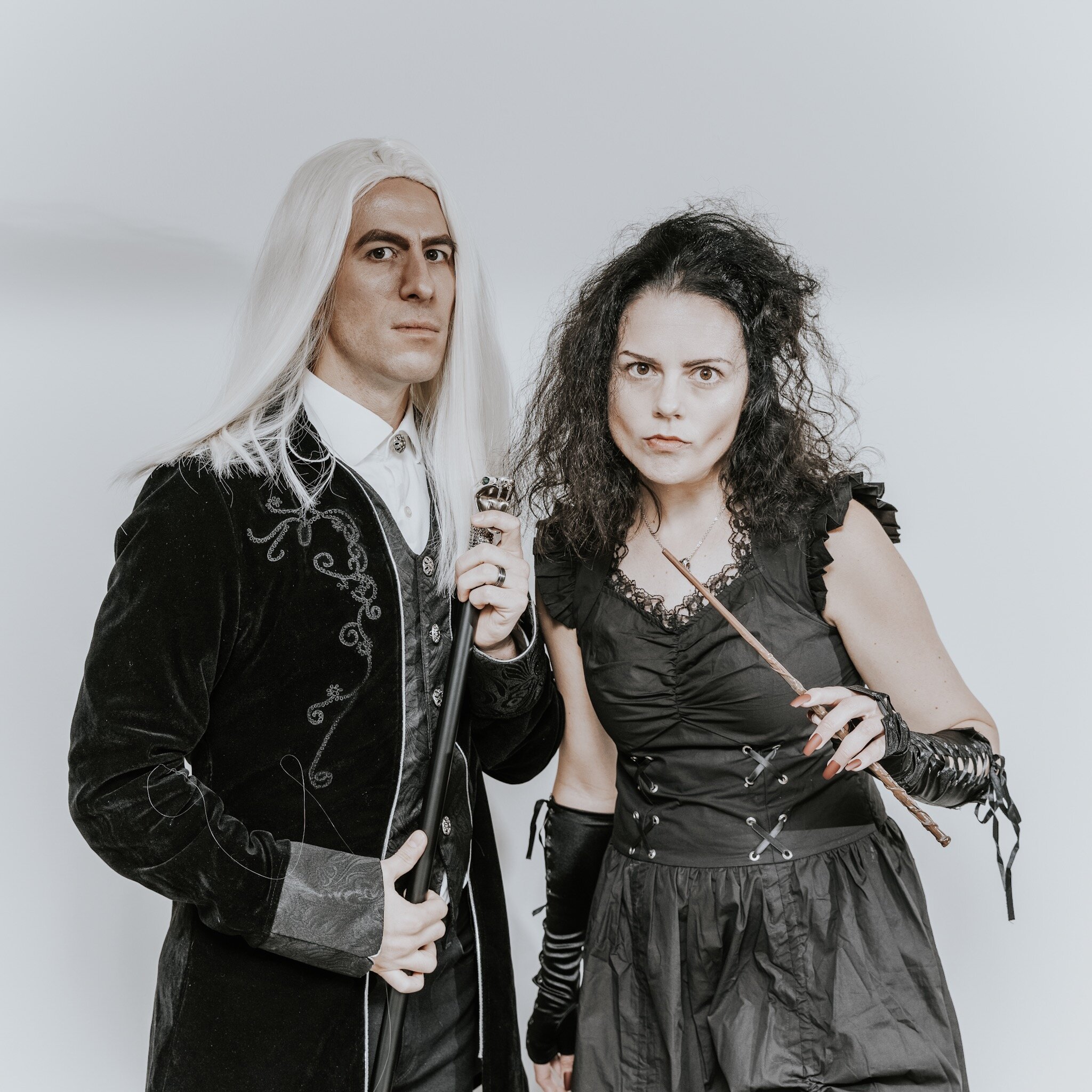 I’ll be honest, my costume’s not quite as legit as it could be. I wanted a slightly edgier dress, or at least to add a corset. But they weren’t available in my size in time for Halloween, so I decided to just get “close enough” with the costume, since Bellatrix’s “look” is more about the hair and makeup than it is the clothes.

My wand is also entirely wrong,, but the only proper Bellatrix wand I could find was pretty expensive, and I was already over-budget turning Anth into Lucius! So I compromised and went with a “regular wand.”

Here are the exact things I’m wearing, all from Amazon!

The Dress | The Gloves | The Necklace | The Wand

I paired it with my black over-the-knee Stuart Weitzmen boots (not from Amazon), though you can’t see them in the photo. Any black boots would work for Bellatrix.

And, here’s the dress and corset I would have gotten if they’d been available in my size, in time for Halloween:

Lastly, if you want to be totally legit, this Bellatrix wand is bad-ass, but pricey. 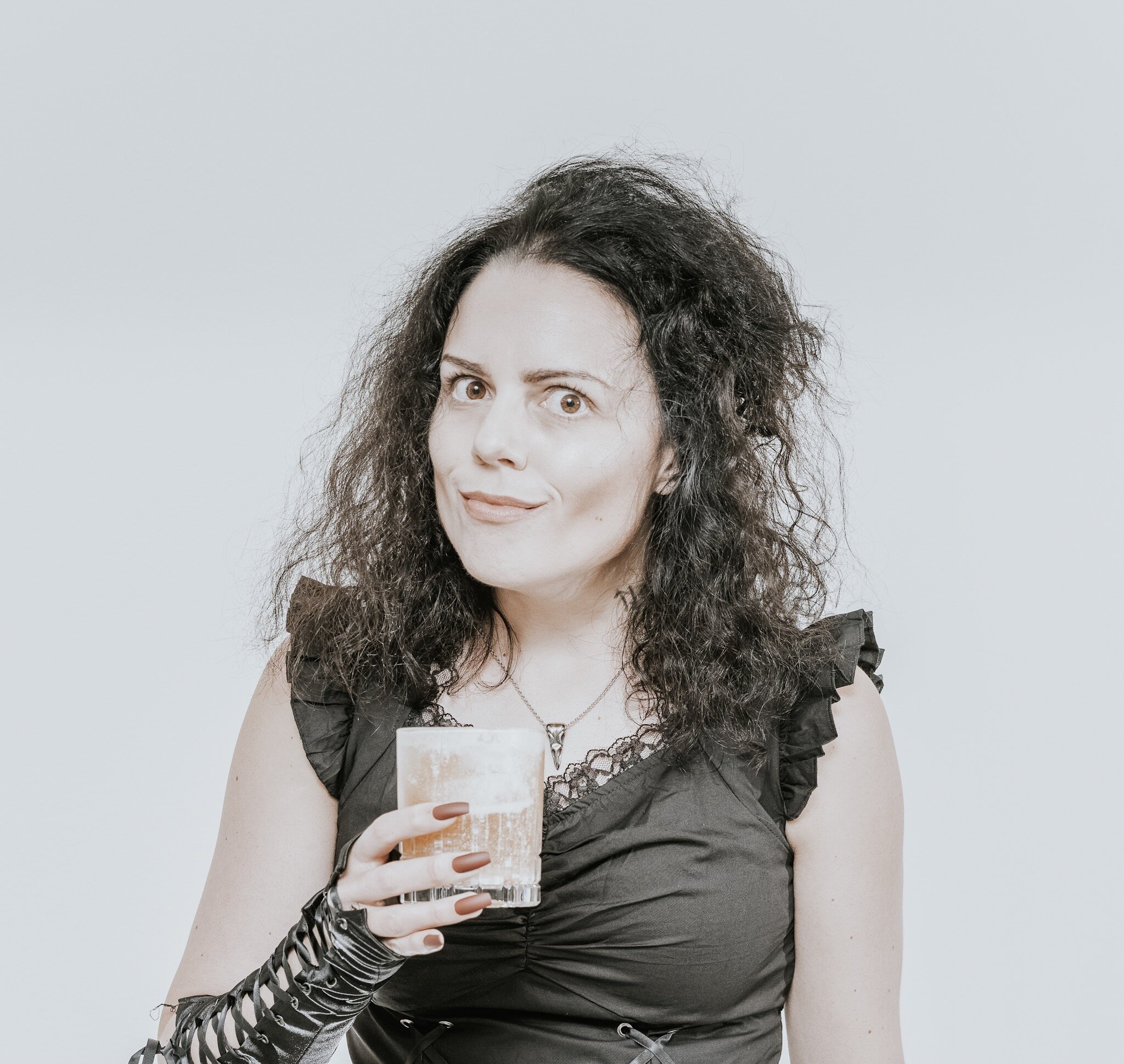 Some kind soul asked me how I got my wig looking so realistic in the photo. Ha! I only wish it were a wig 😉 That is, in fact, my real hair.

Fortunately and unfortunately, my natural hair texture is pretty darn close to Bellatrix’s, which means this is perhaps the easiest hair style I’ve ever had!

Here’s what I did:

Annnnnnnnnnnd, if you’re not “lucky” enough to have Bellatrix’s hair naturally, here’s a wig 😉

Ah yes. Now we get to the good stuff, and the hallmark of Bellatrix Lestrange’s “look.” — the makeup.

I studied a lot of pictures of Bellatrix, and got uncomfortably familiar with Helen Bonham Carter’s features to figure out how to recreate them. I used a few different photos as reference to see what she looked like in different light and angles.

Basically, I did my homework so you don’t have to, and your makeup goal is this:

Here’s a quick visual reference of how I achieved the look, with my exact steps below the photo. 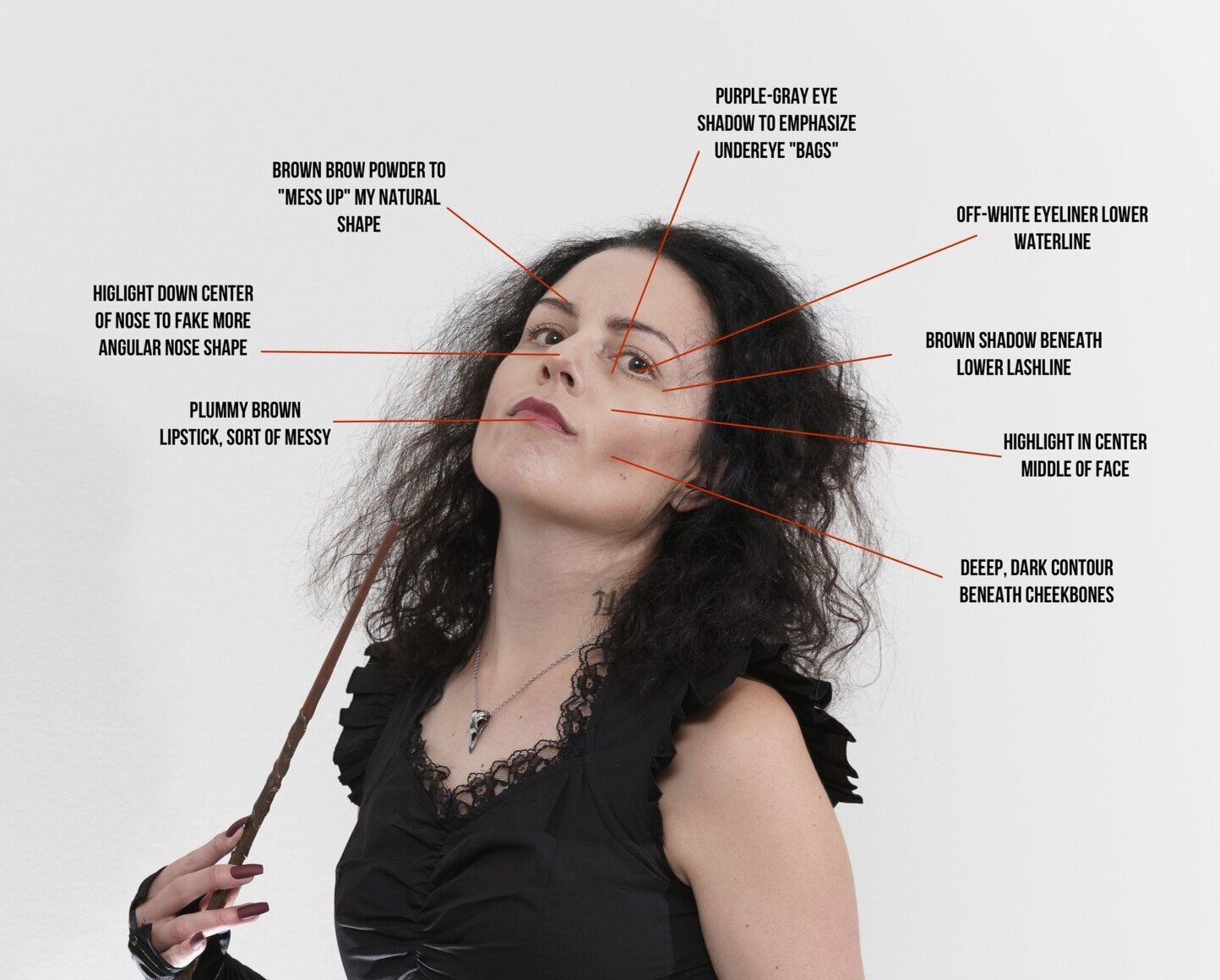 Here are my exact steps and products to achieve the above.

I used a liquid foundation in one shade too light (Lancome Teinte Idol 260N) all over my face, and set it with Charlotte Tilbury Airbrush Flawless Finish powder in Shade One.

You don’t need this step for Bellatrix. I have a lot of pink in my face. Since Bellatrix has no pink in her complexion, so I wanted to neutralize my rosy cheeks. If you have pink cheeks like me, or just want to start with a neutral, pale base to make the cheekbone part easier, then yes, I’d recommend putting a layer of foundation down. Even better if you’re like me and have purchased a shade too light and forgotten to return it.

But, I wouldn’t go out and buy foundation for this look—flawless skin is hardly a hallmark of Bellatrix Lestrange!

I noticed a lot of women who dressed up as Bellatrix Lestrange did a dark smoky eye with lots of dark grays and black liner. I understand the inclination. Black liner and gray shadow definitely seems like it’s the gothic, witchy way to go. But if you look closely at photos of Bellatrix, she really doesn’t have a dark, smoky eye going on.

The colors the HP makeup artists used on her waterline and lids are actually fairly light, with helps to emphasize the sunken look of her eyes (which I’ll tell you how to get below).

Also, pro-tip: using a lot black liner or dark eye colors can actually actually make your eyes look smaller, in the same way black clothing is slimming! But for Bellatrix, you want your eyes to look wide. Too much black liner or gray shadow will diminish that effect.

Using a purple-gray eyeshadow (I used Bobbi Brown Heather, but I saw a bunch of drugstore dupes that would work in CVS), use a fluffy eye shadow brush (your finger works too) to apply the purple-gray shade everywhere you would normally put under-eye concealer. Yep, you’re reading that right. Instead of covering up the “dark circles under your eyes,” you’re going to emphasize them. Basically, you want to make yourself look tired, and your eyes seem “sunken.”

A little note on contouring …

In real life, I don’t really contour anymore. I think it looks too harsh, and prefer to rely on a pop of blush on the apples of my cheeks which feels more fresh and youthful to me. But blush has no part in Bellatrix’s look, so I was most definitely regretting having gotten rid of my Kevyn Aucoin Contour Book earlier this year!

If you’re looking for a super high quality contour product, I highly recommend that one. Most contouring colors are too warm/brown, almost like a bronzer. For a contour, the goal is to fake a shadow, not a tan, so you want a color with a bit more gray, and Kevyn’s is the only one that has the right amount of coolness (the medium shade, specifically).

Alas, I don’t have that anymore, so I had to pick up a cheaper contouring alternative at the drugstore. I went with NYX’s Highligt and Contour Pro Palette. The sculpting shades were just a little warmer than I’d like, but for less than half the price of Kevyn’s, it worked fine. If you can’t find that the NYX version, most drugstore brands have a contour option now. Just make sure you get something with at least two shades: a darker one (for sculpting) and a lighter one (for highlighting). 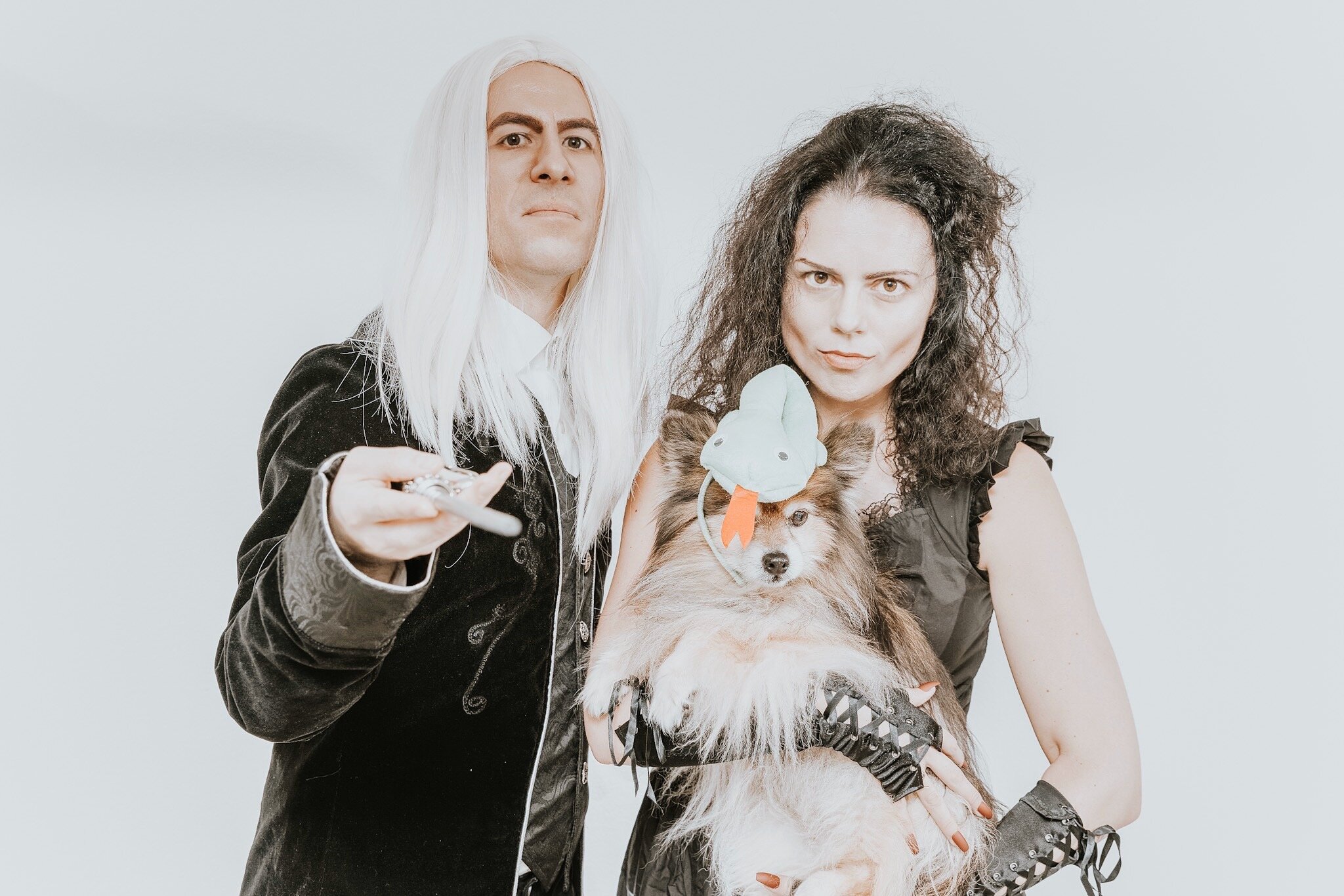 You want a plummy, brown shade of lipstick. I used Bobbi Brown’s Luxe Lip Color in Bond. Apply it imperfectly, this is Bellatrix we’re talking about! Put it on, then blot a bit off it off in some spots, but not others. I didn’t have a matching lip liner shade, so I used the point of the lipstick to “cheat” my natural lip line. She doesn’t have as much of a bow on her upper lip as me, so I used the color to give the illusion that my upper lip line was straighter across than it is naturally. She also has a wider mouth, with a slightly downturned bottom lip, so I used the color to fake that as well.

My natural eyebrows (at least my eyebrows after I over plucked in the 90s) are a bit shorter and more angular than Bellatrix’s, so I used my usual brow powder (Bobbi Brown brow kit in Medium) and Anastasia Beverly Hills angled brush to apply the lighter color at the the top edge of my arch, using sort of a “rainbow” shape to soften the sharp point of my natural brow and make it rounder.

I used the darker color to extend my outer brow on the lower side, cheating it closer to my my eye, as well as to create a more rounded, “messy” look on the inner corner of my brow.

I didn’t think about the nails until last minute, so I just picked up some press-on acrylics at the drugstore in a dark red. Not a perfect match, considering her nails are sort of yellow and mangled. If I’d planned ahead, I’d have gotten something like this. But my natural nails are extremely short, so I figured any press-on option would be more talon-y than my regular manicure.

I’ll be honest, this look was pretty easy to pull together since my natural hair texture is a nightmare, and because my bone structure and square face shape isn’t entirely unlike Helen Bonham Carter’s.

But I really think anyone can get the look pretty easily, just make sure you resist the urge to make your eyes look too sexy with dark liner, embrace adding purple shadow under your eyes, and of course, the cheekbones! 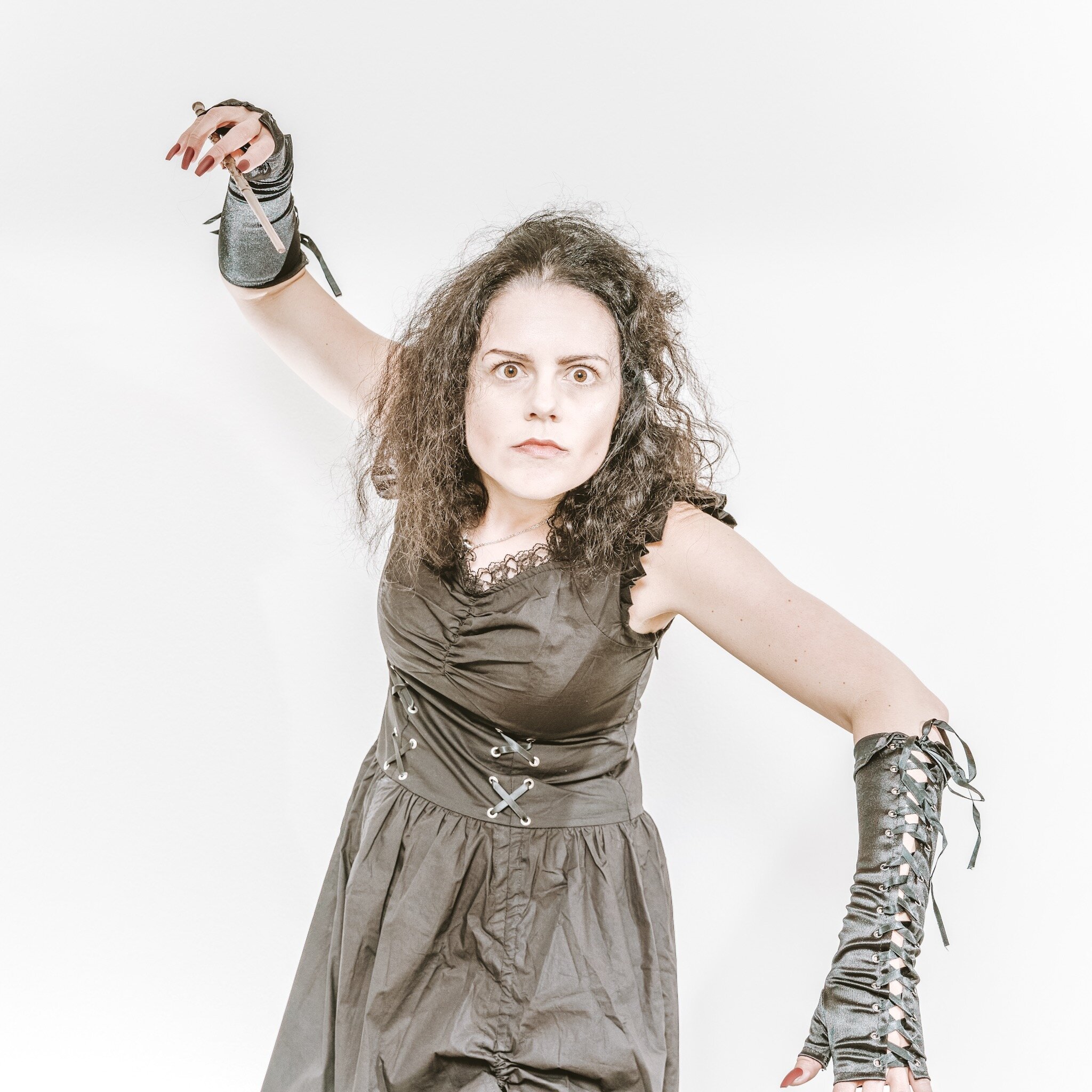