I start this post with that statement, because this is not going to be one of those articles where I’m like, “I was a hot mess, and this one app completely changed everything and turned me into an organized superstar!”

I was already sort of an organized superstar, if I do say so myself. I’ve always been obsessed with systems and processes and productivity hacks. I read every book on habits and systems that I can find.

Some things I love for a hot minute and lose interest in fast (my traveler’s journal). Others I used to sing the praises of, only to be let down, and eventually abandon (Evernote, you buggy beast!). Other things click immediately and become major lasting game changers in the way I navigate my day-to-day (The Ivy Lee method).

I’m a big fan of goals and dreams and visions, but I also know that without some sort of system in place, I tend to meander though my days not really achieving any of the things I want to achieve. And my old way of doing things worked fairly well, with one major flaw:

No one tool did everything I need.

I was constantly jugging multiple apps depending what information I needed to access throughout the day: Airtable for social media assets. Trello for editorial calendar. Bear (Mac-only Evernote competitor) for notes on the go. Bullet Journal for daily tracking/organizing. IA writer for formatting blog posts. Specialized to do apps to make sure nothing fell through the gaps. iCal to track due dates and release dates. Google Docs for collaboration. A word processor to write my blog posts. Dropbox for asset organization. Dropbox Paper and Monday for process tracking of my design business. Numbers/Excel for tracking book details and affiliate links. And so on.

And like I said, I got by—there are some pretty cool specialized apps out there that do exactly what you need them to do. But the downside of this hodge-podge approach to Tracking All the Things is that at some point, you almost need a system to track the systems!

I’ve spent more time than I’d like over the past years thinking, “Now where did I put that idea again?” Or, “I wish my editorial calendar app could do ….”

Not to mention, every time you have to switch among apps to figure out what you should be doing next eats up the time where you could actually be doing what needs to get done.

I can’t tell you how many times I’ve desperately hunted for a tool that can track everything—one place to keep and track all my stuff.

A Lauren Layne Hub, of sorts.

The closest I’ve ever gotten is Sharepoint. I used back when I was in the corporate world for task tracking, documentation, writing, calendar, team collaboration, marketing documentation, brand management, etc. But Sharepoint for individuals or small business is a horror, and I really just ave a terrible time with the usability of Microsoft products these days.

And then … (imagine angels singing for full effect):

I found a solution. The solution.

There is a new-ish app on the marketplace called Notion, and it is (almost) everything I’ve been looking for for a decade.

I can’t remember how I discovered it—I really wish I did so that I could go back and hug that person. I do know that not nearly enough people are talking about this app, which is why I’m dedicating an entire blog series to it (this will be the first of many!).

Notion describes itself as an all-in-one workplace. From their website:

“Write, plan, collaborate, and get organized. Notion is all you need — in one tool.”

“Too many tools? Too much chaos? With Notion, all your work is in one place. Four tools in one. No more getting lost in tabs.”

Four tools in one. No more getting lost in tabs.

Which, um, is exactly what I’ve been saying I needed?!

And it delivers on the promise.

Here are the tools that Notion has replaced for me:

But the really cool part of Notion isn’t just that it does everything you want it to, it’s the sheer flexibility of the tool. Anthony uses Notion just as much as I do, but it always astounds me how differently he uses it.

You can truly organize and structure Notion however you want. And yes, in full disclosure, it can be a little overwhelming at first, because there are just so many ways to do things! When I first downloaded the app I was almost vibrating with excitement at all the potential, but also thinking, “But where do I start?”

Don’t worry. They’ve got some great templates to get you started, and pretty quickly you’ll start to visualize all the ways you can use and organize things in a way that makes sense to you.

Once I got the hang of the various options and functionality, I loved that I could design my process and system my way, rather than the way some UX designer thought you should organize information.

For example, of the huge downfalls of Evernote (and many other note apps) was the lack of custom organization. By default, Evernote always placed the most recent note you accessed on the top of the list of whatever notebook you were in. I’d end up with hundreds and hundreds of notes and no way to organize them aside from their tagging system, which just never clicked with my brain’s way of doing things.

Notion is much closer to OneNote in that you can organize your notes however you want. In fact, if you’re wondering what Notion is most similar to, it’s probably OneNote! I’ve never been a huge OneNote fan; it’s always felt a little clunky, and I loathe the reliance on Microsoft OneDrive. But I respect the functionality, and if you’re debating between the two, this is a great comparison.

Now, you may have noticed that I snuck an almost in there when I was talking about how it replaced my various apps. It almost replaced all of my apps. There are three things that things that Notion doesn’t do well, so I’m still supplementing that with other tools, but I’ll cover those in another blog post.

For now, let me show you a little bit of Notion in action. One very popular way of getting started with Notion is creating your own “Home” screen. I do this, but I call it “Lauren Layne Empire” because the aspirational sound of it is more motivating to me. This screen is the first thing I look at every single morning, and it’s my “home base” throughout the day when I assess at the top of each hour what to do next: 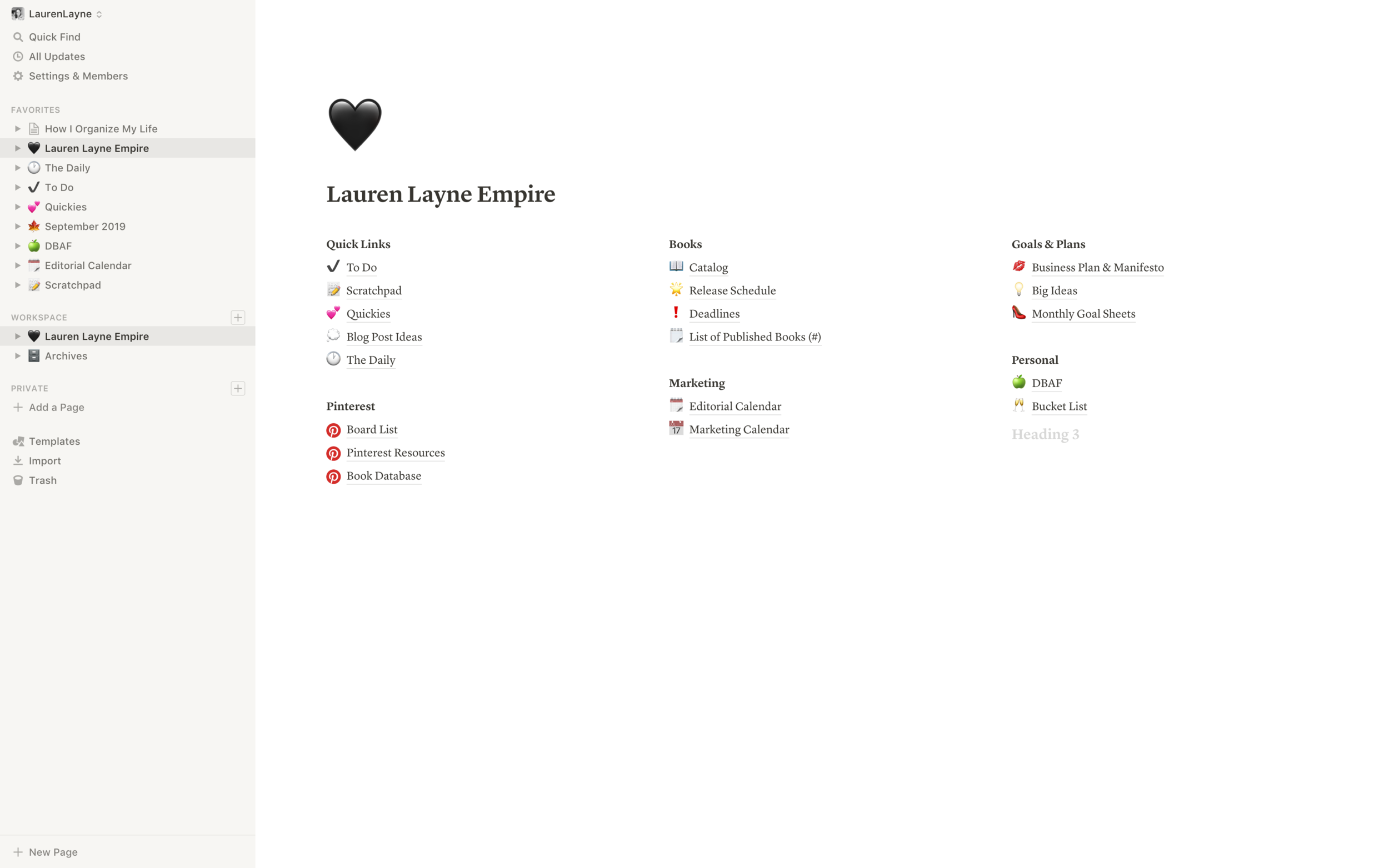 That screen above is called a page within Notion. And as you you might expect, each of those links takes you to another page; and here’s where it gets pretty cool: you can add as many pages and sub pages as you want. For example, if you were to click Catalog under Books, you would see this: 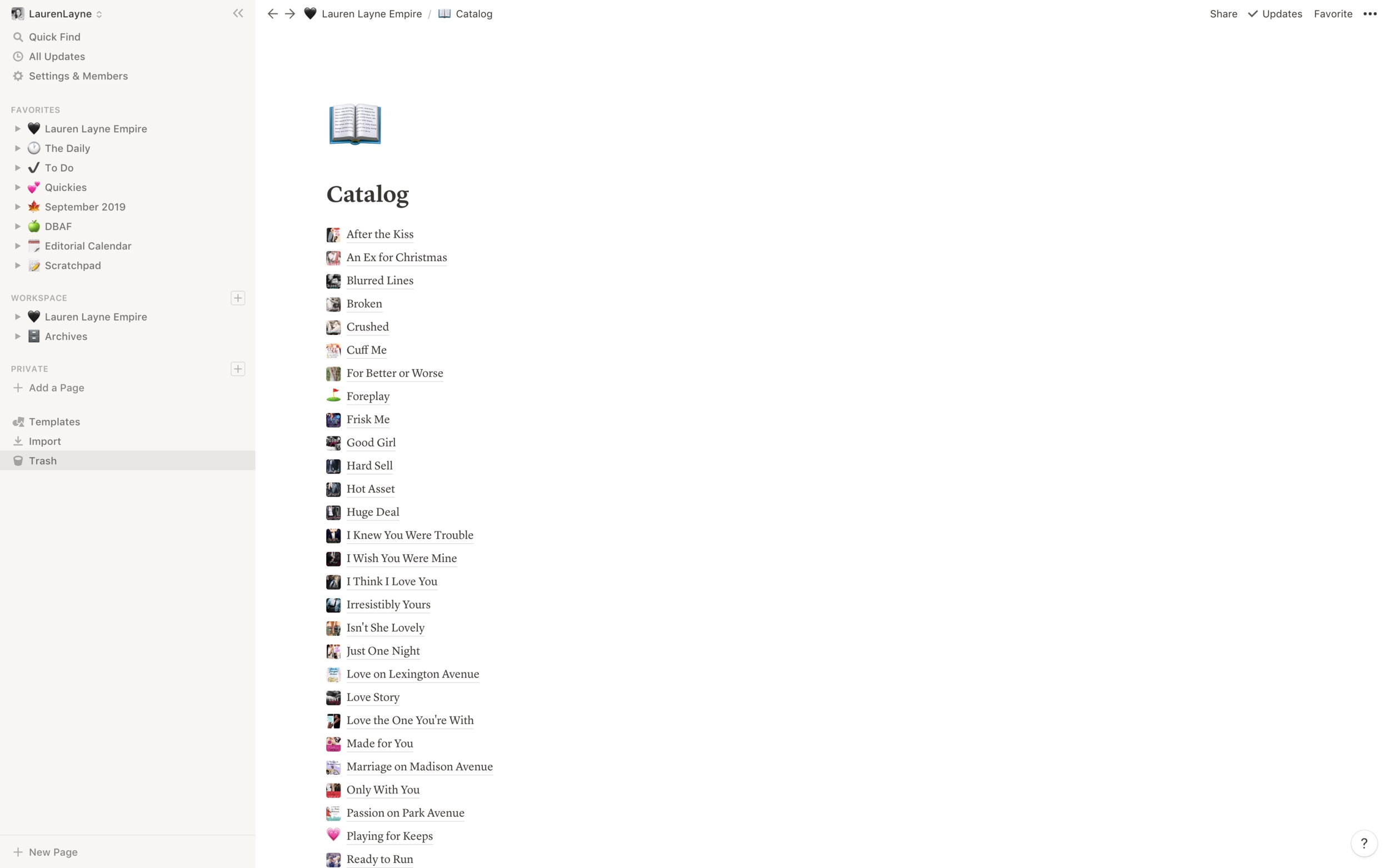 And if you click The Prenup from that page, you would see this: 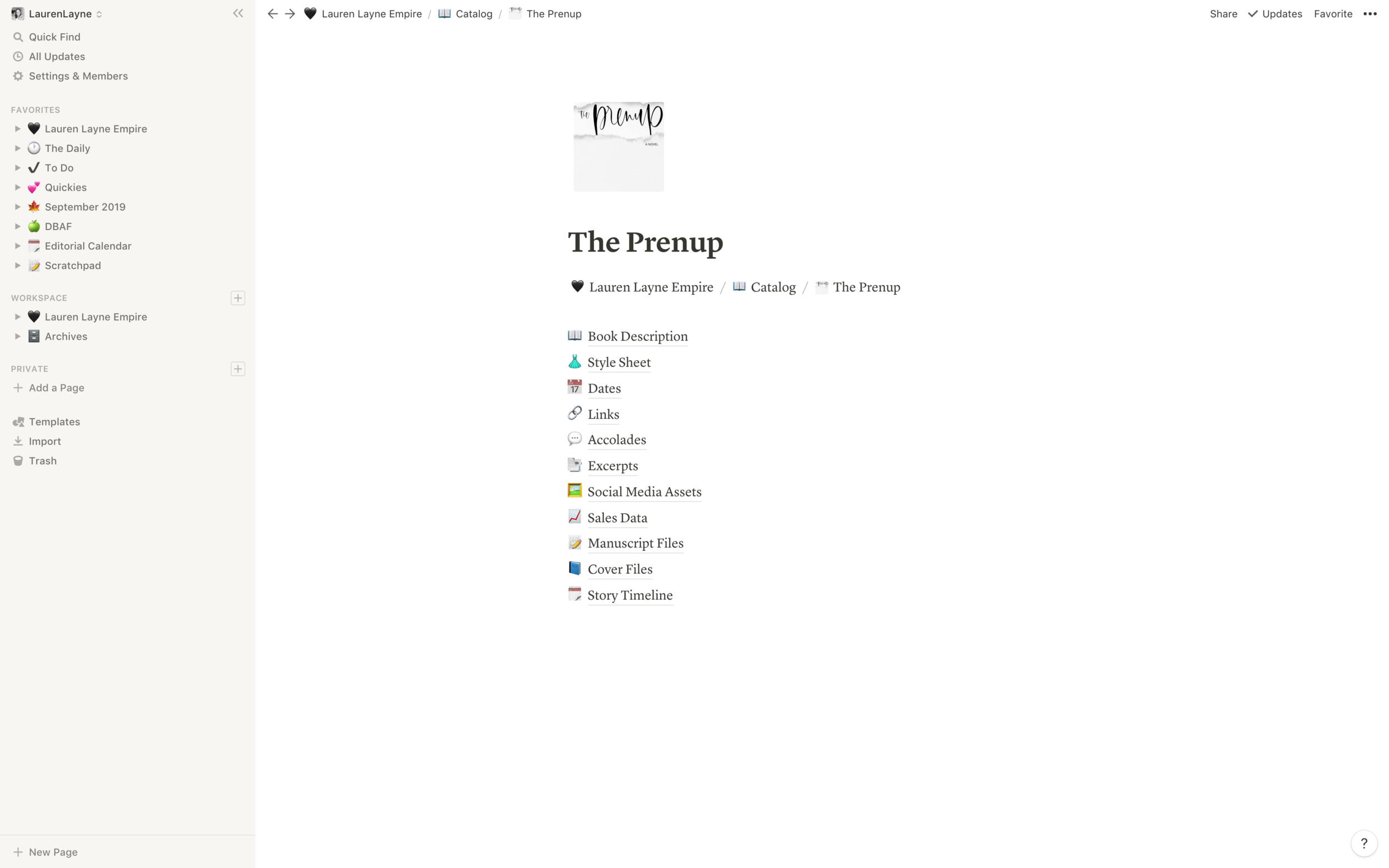 Now, the three pages I’ve showed you before I’m using as hierarchy pages; a table of contents of sorts. But yes, of course you can create actual content on the pages.

For example, if I were to click on the Accolades link from that Prenup page, you would see this: 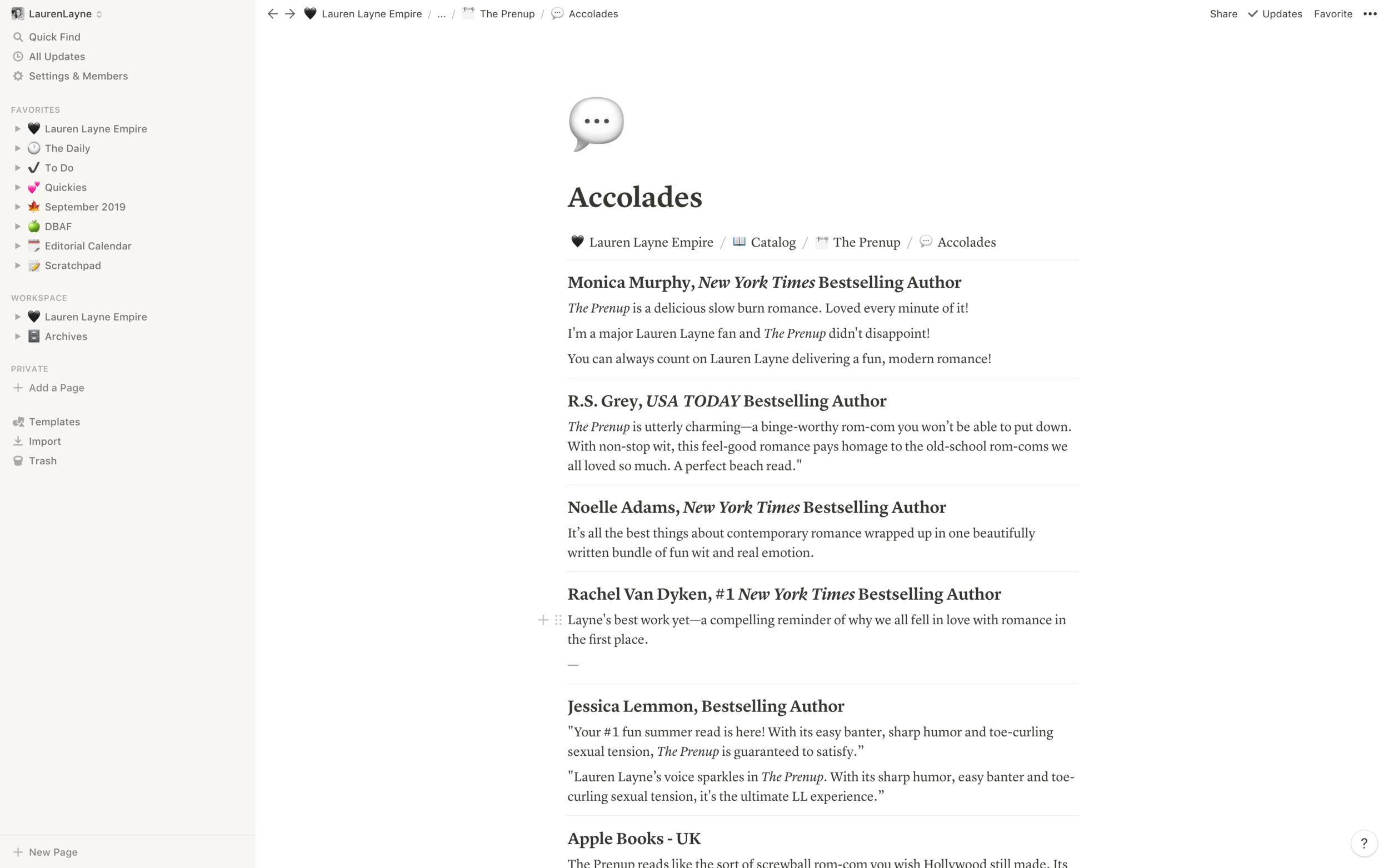 And if you were to click on the Manuscript Files page, you would see this, where I’m able to embed links to files so I always have quick access to my final manuscripts to send to movie producers, audio producers, etc. 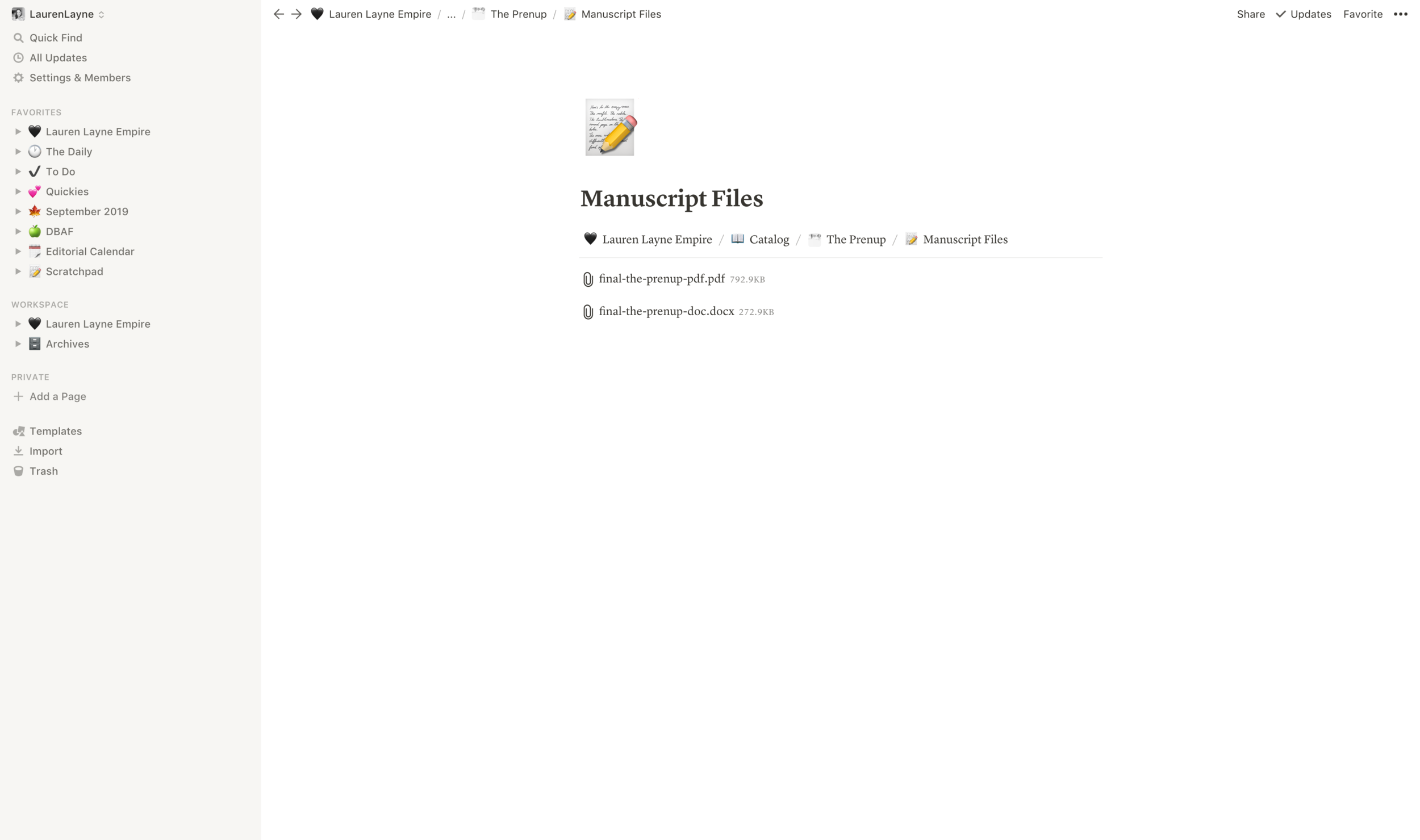 To show you something even cooler, take a look at my September Dashboard. When I’m feeling a little aimless or distracted, this gets me back on track for what I want to get done this month. I had to block out some of my Big Goals and the To Do items to achieve those goals, since they’re “unannounced projects,” but you get the idea of how wonderfully flexible this app can be. You can drag-and-drop text/images/to do lists just about anywhere on the page, and lay them out your way. 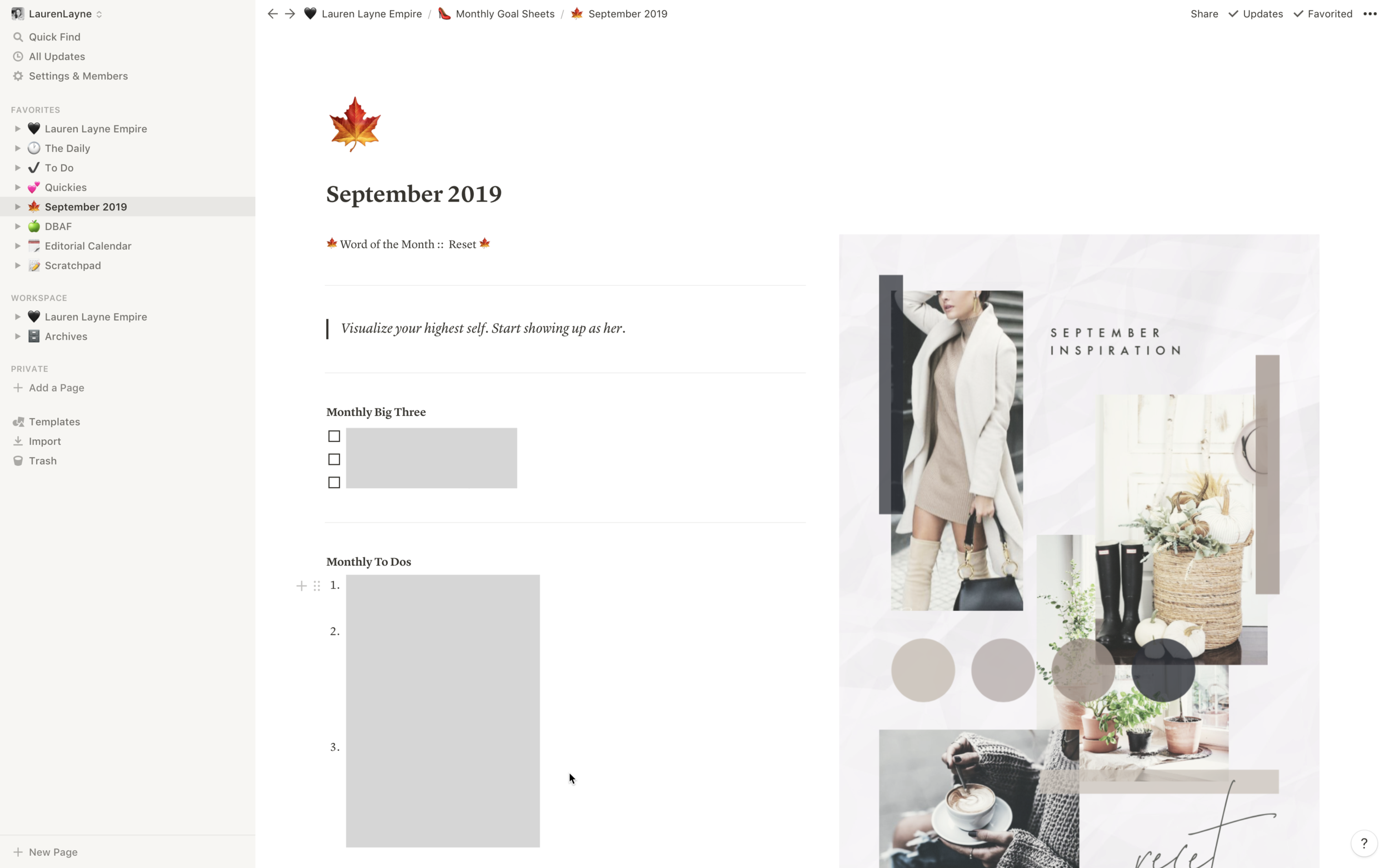 You can create Kanban tables (think: drag-and-drop cards like Trello).

You can create robust to do lists, spreadsheets, reminders. You can embed images, videos, documents, Google Maps, PDFs, etc.

Now, I’m self-employed as a full-time author, so I use Notion mostly for work, because work is my life, in the best way possible. But eventually I have plans to use this for all areas of my life: recipes, tracking home inventory, habit tracking, exercise plans, books I’d like to read, etc.

You can truly use it for anything and everything!

Lastly, I’ll leave you with a little feature, but it’s one of my favorites:

Whenever you create a new page, you have the option to associate an emoji with that page (and it even lets you upload your own icon—for authors, think: your book covers!).

So in the end, your Notion set up can end up looking a lot like this on mobile:

C’mon. How can you not be intrigued?!

As I write this in September 2019, they have four pricing models:

For the past year, I’ve been using the $4.00/month version, and it had absolutely everything I needed. I did just upgrade to the Team version, as Anth and I have moved our Last Word Designs business to Notion as well and need to access shared files, but even then, the $8/month price tag is a tiny fraction of what we were paying before for our team resources.

This is not a sponsored post, the Notion team doesn’t even know that I exist, much less ask me to write this post, I just really love the that much, and want to share a link if the screenshots above look like something you could use in your own life/work.

In full disclosure, Notion does have a referral program, so I do get $5 in Notion credit every time someone signs up using the link above. But you’ll get $10 credit towards a paid Notion plan!

I hope it’s as much a game-changer for you as it has been for me!

How I Organize My Entire Life